The Untold Stories of Spring 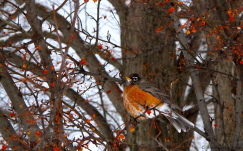 The best treasures of spring are borne from winter’s keepsakes.  At the end of October, I saw you swell, your red breasts growing round and full, whereas before you were as lean as a hieroglyph.  I watched you often in the tree tops, where the red berries grew.  I marked the changes you bore in my book without understanding what you were carrying inside.  I wanted to ask, but when you saw me, you always told me the same thing:  “My heart is a big place, and its dimensions will astound you.”

2. The stone sculptures were hewn from a harsh tradition.  There were warriors brandishing weapons, maidens defying their captors and kings defending their thrones.  Every muscle was taut and no sinews were spared.  But it’s a season of plenty now, and the austerity is over.  The cold, hard lines of stone are softened by the petals of flowering trees, pink and incredibly light.  These in turn are further soothed by tinges of cream that percolate through the blush, and the crowding blooms are softened even still by the low tumbling branches, again and again, unfolding towards the ground like wooden ladles spooning out desserts upon the grass below.

3. Is there anything as eternally cute as a squirrel bringing its paws up to its whiskered mouth?  I can never get enough of it.  The squirrels here have not had many days off.  They run around relentlessly, well into the winter months, workaholics to the core.  I believe that they gather the nuts when it was cold, and are now reclaiming them as it gets warm, but to be honest, for all their scampering, I wouldn’t have been able to tell the difference.

Something has changed, though: I swear today the furry forms are smaller, making tighter C’s as they curl up on the branches.  These are babies!  They’re starting out high in the world, for their mother has made them a home in the largest tree in the park.  The old tree spreads its arms wide and wriggles its toes, which are now free from ice and have given way to a bed of daffodils and rhododendrons.  The mother squirrel squeaks an ultimatum at her twins as she runs up to the highest branches.  The babies follow suit, but keep turning back, peering down at me with unbridled curiosity, obviously uninitiated to my roving lens.

4. This story was told by Dr Rachel Naomi Remen:

“Three stone cutters were building a cathedral in the Middle Ages. You approach the first man and ask him what he’s doing. Angrily he turns to you and says, “Idiot! Use your eyes! They bring me a rock, I cut it into a block, they take it away, and they bring me another rock. I’ve been doing this since I was old enough to work, and I’m going to be doing it until the day that I die.”

Quickly you withdraw, go to the next man, and ask him the same question. He smiles at you warmly and tells you, “I’m earning a living for my beloved family. With my wages I have built a home, there is food on our table, the children are growing strong.”

Moving on, you approach the third man with this same question. Pausing, he gives you a look of deep fulfillment and tells you, “I am building a great cathedral, a holy lighthouse where people lost in the dark can find their strength and remember their way. And it will stand for a thousand years!”

Yet each of these men was doing an identical task.

5. “The reason for a flower,” wrote Ruth Heller, “Is to manufacture.”  Stamen, stigma, sepal and style.  Science to a 6 year old was about deconstructing a flower, and knowing the names to its different parts.  I’ve lost count of how many nights I spent with my head resting on my mother’s lap, the book open wide, the words and the pictures pulling me into a dream.  Stamen, stigma, sepal and style.  Every single word sounded so magnificently … clever.

6. Take away the chandeliers.  The stained glass windows, the scalloped shades, the ruby-studded goblets with the diamond stems.  The perfumed linen, the velvet throws, the crystal chimes that plummet, and not float, as they fall.  The mounted frames, the imported veneer, the wind up clock with the golden key. The housecat’s collar with the silver bell, the jade family, the sandstone arch, take them away, too.

I would still be richer if left with my magnolia tree.

7. Somewhere in the world, there is a dreamy young sous-chef making canapés.  She smells of flour and cinnamon and has a scar just under her chin.  She obsesses about the pastry while its in the oven, testing for its lightness when she finally takes it out.  She arranges the pastry flakes on a wooden slab, four edges touching in the middle.  Pointing a soft icing nozzle at the centre, she squeezes out a succession of perfect green spheres, like a cluster of tiny eggs.  The outer edges of the pastry, she decides, must be toasted to a deep brown.

Because that’s how the Japanese dogwood tree does it.