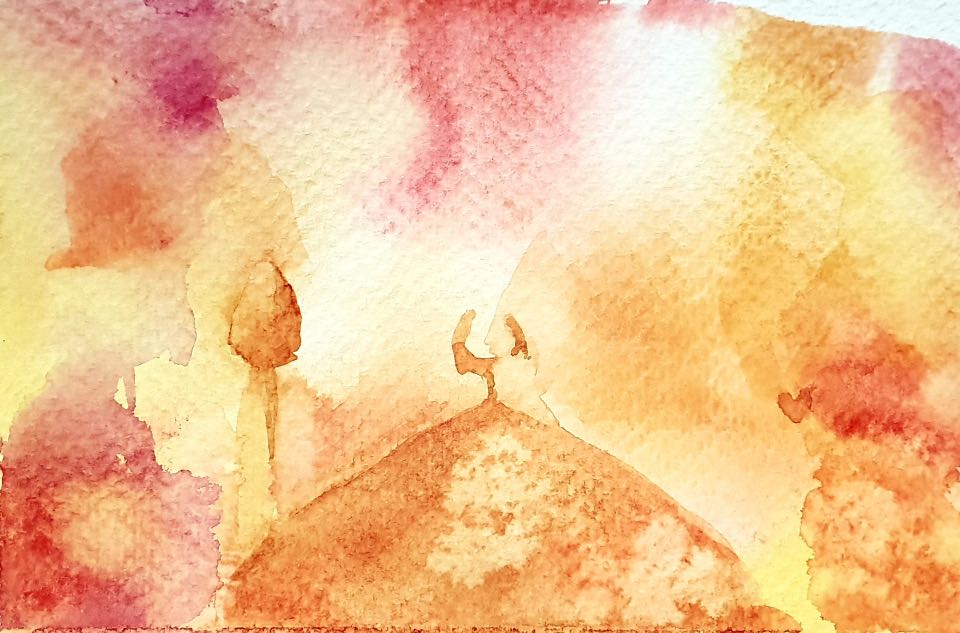 I was told that the elders went first.

They followed a trail of supplications, uttered year after year

In quiet work, in nature’s lulls, in watching the rice pot or babes as they sleep.

As they rose from the worn prayer mats and spiralled to the skies, they looked around mid-air and smiled at the faces beside them.

We are destined to see the end together.

But near the dome, their guide bid them halt

And hovered for just a moment.

Others, it seemed, would join them.

They waited and wondered

More of our friends, perhaps?

Then came the son of Ahmad. The daughter of Kareema.

Their neighbour Idris and their friend Aslan.

Rosanna, who had come to pray with the family before going away for her studies.

Lila who kisses their hands when she sees them at the grocer.

Their arrival startled the elders

who had thought them ahead of their time.

But it was when the first child rose towards them

Looking down past his little feet

… like when he soared on the swings, his fathers palms on the small of his back for every oscillation

… like when he floated at the surface of a blue sea, peering through crab-shaped goggles at the fish by his toes

That the elders felt a bloom of something akin to that

which they thought they had left on Earth

Hunched, they hunched further to gather him into their numbers

Come little one, come with us now.

What is that? he asked.

On the ground was a dark force ragged and lurching

It rushed in a cruel surge that pulsed with evil intent

It fed on an ugliness that engulfed its flesh

It scraped and pulled to bring nothingness into the world

In the mire it flashed its dark teeth, crushed by gnashing and loathing of self

Come away, little one.

He traced its jagged path, storming through fallen bodies

Sliding through torrents of red

What is that? he asked again, but this time, a whisper.

One of you, said a voice as old as time

Winged and weary, their guide spoke only truth

It moved though it was tortured and wretched

It laughed though it knew only sorrow

It grew though it would never be whole.

Will it find a way back?

Eyes met eyes and looked away

None of them knew

Even now, inching closer to heaven,

Even though in their long-fought years, they had seen this tiresome force before,

No answers came to them.

It glinted gold in the sun

The curved chamber had served them well, but now rang with echoes of shots and screams

They sat for a moment, by the minaret, and like the boy, they looked down

They saw their families in tears, and had they a moment to spare

How they were loved, that their anguish will subside, that light and strength will live on, that they will rebuild.

But their time here was through.

So, they held on to their messages, learned them by heart. For a later dream, a whisper, a siffling wind slaking the thirst of a loved one on a hot summer day

They even taught the boy the words that might soothe

The raw edges of the living

Wrought with loss and mourning

When will they rebuild? he asked

Only one elder remained, to lead him upwards with the others.

He lifted his hand from the Earth

And placed it within her palms.

On the 15th of March 2019, a gunman charged through Al Noor Mosque and Linwood Mosque in Christchurch, destroying the profound peace of the Friday congregational prayers, the jumaah.

Christchurch is not so far away from us. And the victims were not so different from us. In fact, are they ever? In their faces, I saw my face, in their families, I saw my family. And although I wasn’t at the congregational prayer that afternoon, an act of worship made mandatory for our men, I was preparing to perform my Dhuhr prayers at home, one of the 5 obligatory prayers we keep every day.

,I couldn’t stop thinking about this awful day. And my thoughts always returned to those people, unsuspecting, who entered the mosque with the intent of prayer, only to leave skyward, released from their worldly trappings, travelling onwards as souls.